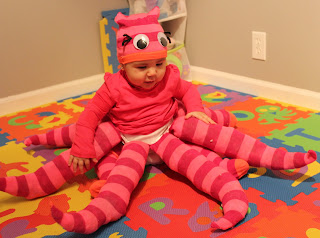 This will be Zoe's first Halloween and I am so excited!
I had this whole idea in my head of a ridiculously elaborate costume for her, but when we went costume hunting the prices were the ridiculous ones. It's not so much that I am cheap (I am, ha ha), but i just couldn't justify paying $50+ on something of poor quality, and generic. So I went over to pinterest and saw a bunch of awesome DIY octopus costumes, it was love at first sight! I headed over to Target and found perfect knee high socks on clearance for $1.75 (Score)!! I used 3 pairs for the legs(arms? tentacles?) and one pair to put on Zo. On Pinterest most of the octopus costumes are pretty much just stuffed socks, and I wasn't too much of a fan. I decided to go just a teensy step further and cut the ends into points, sew them together and stuff a few pipe cleaners in there to shape them a bit. I stuffed them with shredded foam (on sale $2.50 at Joan's). I attached the legs unto a ribbon I had on hand, in hindsight I kinda wish I would have used a matching ribbon. I tried my best to find a matching hat but failed. I improvised and cut off the top part of Zo's socks, and sewed them together to make a pretty cute hat. I glued on some googly eyes and pipe cleaner eyelashes and BAM an adorable octopus. I spent around $10 on the whole thing.
Not gunna lie I am pretty impressed with myself haha.

So although I loved the Octopus costume, I decided to go with something a little warmer for the actual trick or treating part. It was a last minute thing so I scrambled to find something for my husband and I. Zoe and I went as ladybugs and my hubby went as a spider. 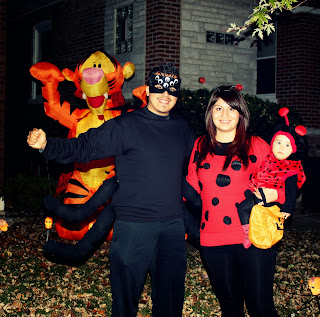 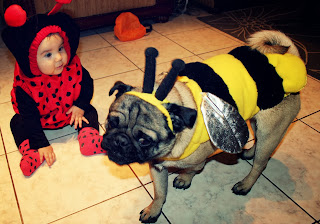 Even our Pug got in on the action!
We spent around $10 on all three costumes. Obviously my costume and my husband's were a bit um, shall we say underwhelming? But seriously I had about a day to make them. I found the ladybug costume at Once Upon a Child for $4.50! Her cute socks were from H&M, aren't they adorable? For my husband's costume I sewed some socks unto an old sweatshirt and attached them to each other with fishing wire. I glued some googly eyes unto a mask and done! For mine, I just cut out circles out of black felt sewed them unto a red sweater, threw some antennae on my head and voila.
Posted by Jen at 8:08 PM No comments: